Oxford has numerous major tourist attractions, many belonging to the university and colleges. As well as several famous institutions, the town centre is home to Carfax Tower and the University Church of St Mary the Virgin, both of which offer views over the spires of the city. Many tourists shop at the historic Covered Market. In the summer, punting on the Thames and the Cherwell is a common practice. As well as being a major draw for tourists (9.1 million in 2008, similar in 2009), Oxford city centre has many shops, several theatres and an ice rink.

There are two small shopping malls in the city centre: The Clarendon Centre and the Westgate Centre. The Westgate Centre is named for the original West Gate in the city wall, and is at the west end of Queen Street. A major redevelopment and expansion to 750,000 sq ft (70,000 m2), with a new 230,000 sq ft (21,000 m2) John Lewis department store and a number of new homes, was completed in October 2017. Blackwell’s Bookshop is a bookshop which claims the largest single room devoted to book sales in the whole of Europe, the Norrington Room (10,000 sq ft). 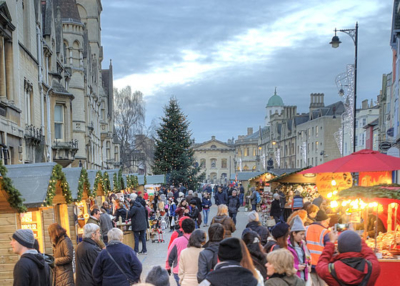