The area around Ironbridge is described by those promoting it as a tourist destination as the “Birthplace of the Industrial Revolution”. This description is based on the idea that Abraham Darby perfected the technique of smelting iron with coke, in Coalbrookdale, allowing much cheaper production of iron. However, the industrial revolution did not begin in any one place. Darby’s iron smelting was but one small part of this generalised revolution and was soon superseded by the great iron-smelting areas. However, the bridge – being the first of its kind fabricated from cast iron, and one of the few which have survived to the present day – remains an important symbol representative of the dawn of the industrial age. 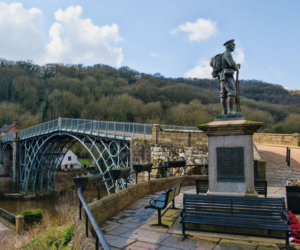